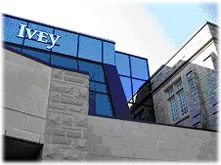 Ivey MBA essays 2015 have not changed at all from last year (2014-15), and remain exactly the same for the 2016 intake as well. However, rather than go over a detailed analysis of these essays from last year (which we already did in this post), we will go over some points of learning and some advice based on our work with many applicants last year.

Most applicants found just two essays as part of the Ivey MBA application to be insufficient. Many felt that they had much more to speak of, and the essay topics  did not allow them to do that.

While we understand that, applicants also need to understand that they need to operate within the constraints of what is available, and try to sharpen their preparation to give their best to these two 250-word essays.

Successful applicants addressed the issues asked for in these essays well rather than worry about what they could not address.

Stick to the Ivey MBA essay core topics: This is possibly the most important thing for Ivey essays. With just 250 words at hand, sticking to the topic is critical, else you will find that your essays fails to address what is asked.

For example, some applicants felt tempted to include their leadership experience and key accomplishments in essay 1. That, though, is not something that is asked for here (there is a separate space for that in the online application). So avoid bringing in extraneous material and stay with the topic only.

GyanOne has a 100% success record of helping its clients make it to top Canadian schools like Ivey, Rotman, Queen’s, Sauder, and Schulich. See some of our testimonials here, here, and here. If you are applying to a Canadian MBA program, Contact us today! to know how we can help you too, or just for a free profile evaluation!

Don’t just be about your job or employer: Many other applicants felt that mentioning the expanse of their experience or their coding skills or the fact that their employer is in the top 50 of the Fortune 500 will be good points for the second essay. This is incorrect.

The size of your employer has nothing to do with why your classmates at Ivey will want to work with you. Similarly, the fact that you were part of your college’s fest organizing committee has little relevance too.

Avoid stating untruths on your MBA application: Another caveat to mention here that one should avoid stating things that are far from the truth. Many applicants, for example, try to state that their undergraduate institution is ‘one of the best engineering/commerce/business (as applicable)’ colleges in their country, when it is clearly not.

Don’t expect the Ivey MBA Admissions committee not to know or realize that. Similarly, if your employer is a small IT services organization or a boutique investment bank (for example), avoid saying that is one of the leading players in your industry.

Not only are you honor-bound to state facts in your application and essays, but those who don’t frequently find that the facts are in plain view of the Ivey MBA Admissions committee anyway.

While Ivey business school has kept its application essays the same, it has changed the broad schedule of the deadlines for the Ivey MBA program. It has also added one more deadline.

This year, the first deadline is in April instead of in May like last year. All subsequent deadlines have also been shifted up by around one month.

Ivey MBA interviews are as much a part of the process as the application and the essays. Do not make the mistake of thinking of them as just a formality.

They are an integral part of the overall evaluation and in fact a critical part of it. They involve an in-depth assessment too, and not just a re-coverage of the areas covered in the areas. Work hard on your Ivey interviews to ensure that all your hard work comes to fruition.

MBA scholarship at Rotman and Ivey: Tough Dilemma for an Indian CA