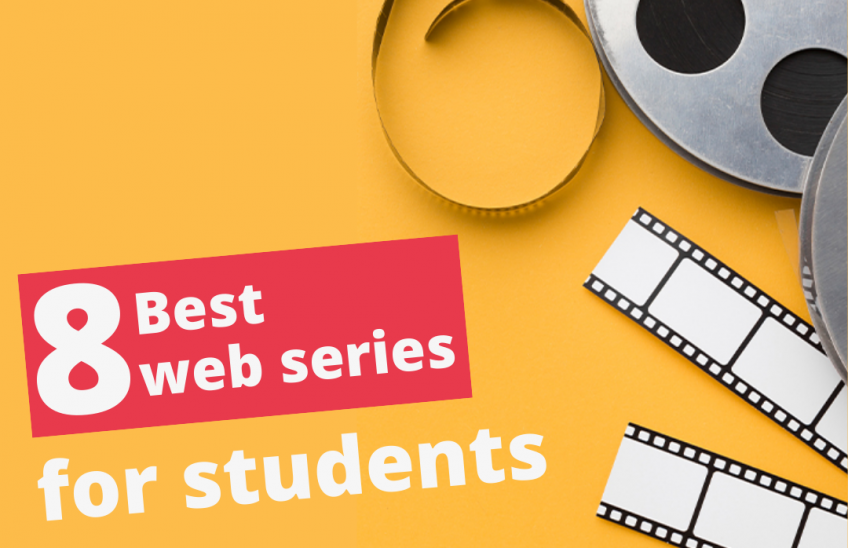 Web Series for Students to help them grow

When you’re a student, there’s a lot of time and energy spent on your studies. While it is important to have fun and get a break from all the studying, sometimes you just need to relax and watch something entertaining.

Can you really learn as a student while watching a web series? Hey, why not!!?? Sometimes, ancient problems and learning demand modern solutions. And plus, even if you don’t, you’ve still had fun!

The best thing about watching web series is that they don’t require too much effort or time, but it’s still enough time to relax and enjoy something new. You can watch them on your phone or laptop as well as on any other device with internet access. You can even download some of these shows on your mobile phone if you don’t have enough storage!

Here are some of the best web series for students that will make you have fun and learn something along the way too!

The show is based on the British series and revolves around a group of employees at the Scranton branch of Dunder Mifflin Paper Company in Scranton, Pennsylvania. The series follows them as they try to impress their boss Michael Scott with their antics. The show has been adapted into several languages including French, Russian and Spanish, but the original English version remains popular among students for its fast-paced humor and relatable characters. If you are a student who will soon be a professional, this is one of the best web series for students that you can get your hands on. Some of the situations shown here are very close to real life.

The Office is a great example of how to work in an office environment and how to deal with difficult people. It also teaches students about teamwork as we see how much effort goes into keeping the office running smoothly despite some difficulties such as Dwight’s poor management skills or Michael’s lack of focus on his job. And of course, there are always office gossip and pranks which can be fun if done in moderation but can also get out of hand fast if not handled properly.

Friends is one of the best comedy shows to watch if you want to learn English while having fun. The show remains popular among students because of its witty dialogues, relatable characters, and great storyline. The story revolves around six friends who live in New York City and how their lives change after they grow older and start families of their own. Friends (US) is a classic sitcom that has been around for years and is still popular today. The show is about 6 friends who have been friends since their college days. They are all getting older and their lives are changing but they still try to hang out together as often as possible.

If there were a competition for the best web series for students, Friends would probably win hands down.

While watching this you will learn about friendship, love, life lessons, etc… which are very important in today’s world where everything is moving at a fast pace and people don’t have time for one another anymore! This show has everything a student needs to know about life after college — from friendships to relationships to work life. It is a great example of how people can learn from each other when they share their experiences with each other. You can learn how to deal with problems in your life by watching how the characters deal with their own problems.

How I Met Your Mother (US)

How I Met Your Mother is one of the most popular sitcoms on television today. It follows a group of friends as they navigate their way through life and love in New York City.

This sitcom follows a group of five friends: Ted Mosby, Marshall Eriksen, Lily Aldrin, Robin Scherbatsky, and Barney Stinson who are all trying to find happiness in life through various relationships with each other and strangers alike. This is a great show for students because it shows how relationships can grow and change over time. It also shows how important it is to have family around you and how much they can mean to you.

The British version of the US show, The Office is arguably the best. It’s funny and endearing to watch. You’ll feel as if you’re watching your own office or school life in the UK. Plus, it’s only six seasons long so it won’t take up too much time!

Parks and Recreation (US)

Created by Greg Daniels and Michael Schur, Parks and Recreation is a mockumentary-style sitcom that follows Leslie Knope as she tries to balance her job as a local government official with her personal life. The show is often referred to as “The Office for women,” but in our opinion, it’s far superior. This NBC sitcom follows the comings and goings of an Indiana town as they struggle with local government bureaucracy. The show is hilarious, but it also provides some very real insights into how politics work. If you’re looking for a new comedy series to binge-watch on Netflix, this one will definitely keep you entertained.

This show is just as funny as The Office but with more heart and substance. If you haven’t seen it yet, you have to give it a try! It has all your favorite characters: Leslie Knope (Amy Poehler), Ron Swanson (Nick Offerman), Andy Dwyer (Chris Pratt), Ann Perkins (Rashida Jones), and April Ludgate (Aubrey Plaza), and many more!

Brooklyn Nine-Nine is another great comedy series that follows an NYPD detective who works at the 99th precinct of Brooklyn. He’s known for his crazy antics and sense of humor but also his commitment to his job as a cop – even when it means putting himself in harm’s way.

Brooklyn Nine-Nine is our personal favorite. It’s a comedy series, which makes it perfect for students looking to laugh. The main character, Jake Peralta, is a detective who loves to break the rules and his antics often get him into trouble with his boss, Captain Holt. If you’re looking for something funny and lighthearted that won’t make you think too much, then this is the show for you!

The web series Yours Truly, 20 Questions is a show following the lives of four college students at an Ivy League school. The series centers around their relationships with each other and their families, as well as their studies and extracurricular activities. The show has been praised for its realistic portrayal of college life, including sexual relationships between students, struggles to balance work and school, and issues such as mental illness.

This show is great if you want to see what it’s like to go through the college experience from someone else’s point of view, especially if you’re worried about fitting in with the other students at your school. It also provides some insight into living away from home for the first time — something many college students struggle with.

Yours Truly is a comedy series that follows the lives of five friends and their adventures in the city. The show has been featured on YouTube’s official channel, and it has also won several awards.

The Misadventures of Awkward Black Girl

This web series is a great way to break up the monotony of your school day. Each episode is only about two minutes long and has a unique theme around it. It can make you laugh, cry and even feel inspired after watching the series. This show is great for anyone who loves comedy, but it’s especially good for those who are looking for something relatable to watch on their phone during their free time.

The Misadventures of Awkward Black Girl was created by Issa Rae, who also stars in the show’s main role as J (pronounced Jay). The series follows J as she navigates through her daily life while dealing with her own insecurities about race and identity issues.

The show has been nominated for several awards including an Emmy Award nomination for Outstanding Short Form Comedy or Drama Series in 2016 and again in 2018, which makes this one worth checking out!

Best Books for Students to Help Them Grow