Would you consider a score of 510 low? Well, a candidate with this score made it through to Duke University’s Fuqua School of Business. So what do we make of Average GMAT Scores at Top MBA colleges? With a score ranging between 500-600, you have a couple of choices- to take the test again or work on every other aspect of your application to make up for the low score.  If you’ve made up your mind to go with the second, then you had better buckle up for the ride! The narrator in the Star Wars movie ((The Clone Wars-2010) was not wrong when he said: “Fear is a great motivator”. The best way to tackle it is to meet it head on!

According to GMAC (Graduate Management Admission Council) which administers the GMAT tests, a score such as the above lands in the 31st percentile of all tallies. So, there is no doubt that this is a low score. Yet, gaining admission into Duke’s School meant that the candidate was able to display the right attributes which made him a good fit for the program.  So, for those with low scores, don’t lose hope as there is light at the end of the tunnel!

There are quite a few instances and cases where students with low GMAT scores have been accepted into reputed schools. That brings you to the obvious question which is – Is the GMAT relevant at all?

As far as the GMAT test goes, the numerous sections on analytical writing, quantitative, verbal and integrated reasoning are designed to judge the student’s problem-solving and analytical skills. Among other things, it is the ability to handle the information overload combined with the capability to handle academic challenges in the program.

Before you begin to palpitate about your low scores, let me also tell you that most schools like to think that they adopt a more holistic approach. So, while these scores are important to create a common ground, schools tend to agree that this is only one of the factors that matter when picking the right candidate.

To give you an idea, you can look at past admits in some of the best business schools. In the year 2018, Northwestern University’s Kellogg School of Management reported that their lowest admit had a GMAT score of 590. Similarly, a look at the range of scores in Columbia Business School reveals 530 as the lowest GMAT score in the same year.

Aryan struck gold when he was accepted into LBS’s MBA program with a GMAT score of 640. The average GMAT score for the graduating class of 2018 was 708 and the range was 600-790.  So, despite falling in the lower end of the spectrum, his profile, experience, essays, interviews, and the application was compelling enough for acceptance. It is not simply that the folks at LBS proudly claim- “just as a high GMAT score does not guarantee admission, a below average score does not eliminate a candidate”!

Why do we see rising average GMAT scores?

Every time you visit a webpage of business schools, you are tempted to first check out the average GMAT scores of the latest incoming class. It gives you a starting point or something to work towards. Once you do that, it is kind of hard to ignore how the GMAT numbers seem to be on the rise. A look at the table provided gives you an idea about the increase in GMAT averages in top business schools.

The biggest jump can be seen in Columbia Business School and Michigan Ross which have seen a 12-point increase from 2016 to 2018. Similarly, among the European schools, INSEAD and HKUST, Hong Kong recorded a 3- and 6-point increase in the same period.

(According to latest rankings by FT for the year 2019)

So, what is the reason for such an upward trend? 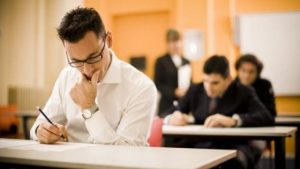 From our discussion above, it is quite clear that most schools try to improve their ranking by cherry picking for the best candidates from GMAT tests. However, does this mean that schools showing a lower average GMAT score perform below par?  This is not necessarily true!  For the year 2018, the average GMAT score for INSEAD was 711 and the range was 600-780. So, an applicant with a score of 600 (you would agree that is not the most competitive score!) was also accepted into the school.

If you look closely at their global ranking, you will find that this European school consistently ranks in the top three (Financial Times Rankings for Global MBA*). INSEAD with campuses in Europe, Asia, and the Middle East, is well-respected for the global experience it provides. It is currently ranked number 3 for its full-time MBA program. So, now your ‘less than impressive GMAT score” does not look as bad anymore, does it?

Consider another great story of Pulkit Kashyap who was extremely disappointed with a 570 as his GMAT score. With about 4 rejections, his journey to a business school could not have been more disastrous. However, after working extensively on his profile, he was accepted into ESADE (Spain) and University of St. Gallen (Switzerland) (ranked 11 and 19 among the top 20 European Business Schools). The average GMAT scores in these business schools for the year 2018 was 665 and 634 respectively.  Read More about GMAT Changing Patterns in MBA

Reading between the lines (numbers)

The average GMAT score of a business school indicates the broad range of GMAT scores for incoming students in any particular year. This can be a wonderful indicator to understand if you have a chance to gain admission to a particular school. However, looking at just the average score may not give you the complete picture.

ISB is another school that prides itself in a holistic approach as far as admissions go. The 709 average GMAT score for ISB is quite competitive to most other business schools but it does not represent an absolute number. Ankit Nanda can vouch for the same as he was able to become part of their program despite a GMAT score of 660. So, it is always best to look beyond the score and showcase your experience, contributions, and achievements to make the maximum impact.

So, what is a Good GMAT score?

Unfortunately, there is a no right answer to the question above and this means that the right score is the one that gets you admittance to the program of your choice. Broadly speaking, the right GMAT score will depend on the school and the applicant.

However, if you are trying to improve your odds in this rat race, then higher the better! A high score means that schools are not in doubt about your academic preparedness. However, where you do end up with a lower score, you must be prepared to work harder to convince schools of your capabilities. Aniket Phatak’s story of his successful admit into NYU’s Stern School of Business with a score of 650 GMAT is something that is inspirational and one that can be replicated.

As Estee Lauder once said, “I never dreamed about success, I worked for it”.  So, as you get ready to take the test, study smart not hard!  Work equally hard on all other aspects of your application and you are sure to find success!