How To Choose Between the SAT and ACT Tests

Home » How To Choose Between the SAT and ACT Tests
December 2, 2019Posted by GyanOneBlogcommon application 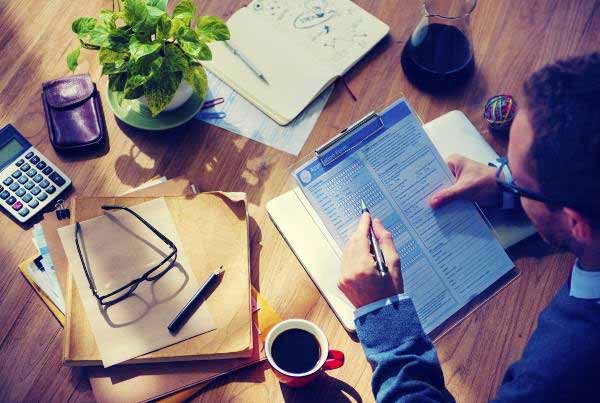 You are definitely out of luck if you are hoping to figure out which one of the two exams is easier! Both SAT and ACT measure the problem-solving abilities, proficiencies, and skills of students intending to sign up for college.

There are several million that take these tests every year and so, the standards are high and the competition is stiff. Therefore, neither of the options is easy by any standards.

The colleges have no specific preferences when it comes to these tests as both scores are used equally to determine the candidate’s eligibility. So, irrespective of the test you pick, you can apply to schools of your choice.

The two exams are similar in many ways and yet different on other levels. For instance, structurally, you will find that while the SAT features a Math section, the ACT test includes a Science component. Thus, understanding the fundamental differences in the test and your own capabilities will help you choose wisely.

Preference between SAT and ACT?

A simple explanation is that the SAT has existed long before ACT came into being. So, naturally, the SAT has always been preferred over its counterpart. It was in 2012 that ACT briefly took over when a few thousand students preferred ACT to SAT (1,666,017 vs 1,664,479). However, ever since then, the number of students taking one or the other has been pretty similar and it is hard to state which test is more preferred based on the number alone.

Looking at the number of students attempting the tests in the past years, there is a trend of people in different regions opting for one or the other. Colleges and schools in the Mid-west region such as the University of Chicago, Ohio State University, Michigan State University tend to prefer ACT scores.

For instance, 35% of students submitted SAT scores while 80% of those admitted handed in ACT scores (there may have been some who have taken both tests). This kind of a regional bias may be due to several reasons such as the fact that many colleges in the mid-west require their students to take ACT under the statewide assessments.

On the other hand, the North Eastern States such as Massachusetts (Harvard, MIT), New Jersey (Princeton University) seem to naturally prefer the SAT. For instance, if you look at Harvard and Stanford Universities, 83% and 86% of admitted students submitted SAT scores while 35% and 39% handed in ACT scores respectively.

So, if you are applying to colleges in certain states, it makes sense to understand which one is more popular in that region. Here’s a look at the SAT vs ACT preference map for the year 2018 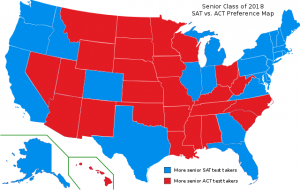 Do the colleges have a preference?

Despite the fact that all colleges and schools declare that they accept SAT and ACT scores without any bias, the SAT is a tad bit more popular when it comes to Ivy Leagues colleges.

For the academic year 2017-18, 67% of the students admitted into the Harvard undergraduate program submitted SAT scores while 53% of them submitted ACT (there are quite a few that attempt both). A point to note here is that Harvard recommends all ACT test-takers to submit at least two SAT II subject tests.

Similarly, if you look at the admission numbers of the University of Pennsylvania, 54% and 46% of students submitted SAT and ACT scores respectively. The university recommends SAT subject tests but does not require them (recommendations for tests are available depending on the program).

This becomes a valid reason for most to want to opt for the SAT and then the SAT subject tests. This is especially true for Engineering and STEM undergraduate programs.

The numbers for the past years show that the accepted students have scored more than 700 in each of the sections of SAT.

The average SAT scores for top Engineering schools are as follows: Likewise, you can check out SAT scores for Business schools by following the link here:

This is one of the most important things to consider. The SAT exam has three sections (excluding the optional essay):

The ACT exam, on the other hand, features four sections (excluding the optional essay):

If you look at the details of each section and the time allotted for each of those, this is how it matches up

The College Board and the ACT organizations conduct the SAT and ACT every year. As per a published report, the average scores for those who took the tests in 2018 were 1068 and 20.8 respectively.

These numbers give you a broad idea of how students perform on these tests. Apart from this, you can also go through conversion charts published by them. This tells you how the ACT scores match up against those of the SAT scores.

You can score a maximum of 36 in the ACT exam. The overall score is an average of the marks obtained against each section in the Test. The optional writing section does not count towards the composite score.

As regards the SAT exam, you will be scored in the range of 400-1600. Reading and writing are two separate sections in the exam but they are combined to account for 800 marks. The Math section accounts for 800 marks.

Both the ACT and SAT are offered about 7 times during the year and based on when you intend to apply for college, you can register for a test. SAT requires you to register about 4 weeks before you take the test. ACT, on the other hand, gives you 5-6 weeks before you can take the test. You can log on to the individual websites of ACT and SAT to gather information about test dates, centers, and other important information.

ACT: The registration fee for the test if you do not attempt the writing section will be $150.00. The same will amount to $166.50 if you choose to attempt the optional writing section in the test. Typically, there is an international fee if you attempt the exam outside of the US and that cost ($57.50) has been included in the above.

SAT: The registration fee for the SAT test is lesser in comparison as the cost of taking the test (with the optional essay) is $64.50 plus the international fee of $ 43-$ 53, which works out to a maximum of $117.50. In the case that you would like to register for the test excluding the optional essay section, then the fees work out to $102.50 (49.50 plus a maximum of $53 as an international fee).

The international fee will depend on the test location outside of the US. There are a number of other additional and optional charges you can sign up for. These can be for registration by phone; verification charges; receiving the scores by phone or late fees among many others.

Which one is easier?

The answer to this question is not as easy or as straightforward as you may expect. Some guidelines for you to pick one or the other (though these may not be perfect or completely correct).

Should you attempt both?

There are a couple of reasons for assuming that you will be better off attempting both these tests.

Reason no 1. Colleges such as Harvard, MIT, Princeton, Caltech do appreciate having both scores submitted. The Dean of Princeton University has gone on record to say that while one test score is fine, giving both scores gives more information about the student’s abilities which eventually works in their favor.

Reason no 2. There are similarities between both tests. This should make it easy for you to attempt one and then another easily. Furthermore, on the occasion that you are unable to break a certain barrier as far as one test score goes, you may want to attempt the other one too.

Despite the above reasoning, attempting both the tests will mean splitting your time between preparing for one and then the other. Further, even the best colleges do not require both the test scores as a mandate. Therefore, it is a smarter decision to focus your efforts on one test to submit an exceptional score. It is definitely better than sending in average scores on both tests!

HEC Paris MBA Application – Must Knows Before You Start

MBA in USA: Karnam cracked All Ross, Tepper and Cornell and Kelley!