Quit Job for GMAT : Why You Shouldn’t 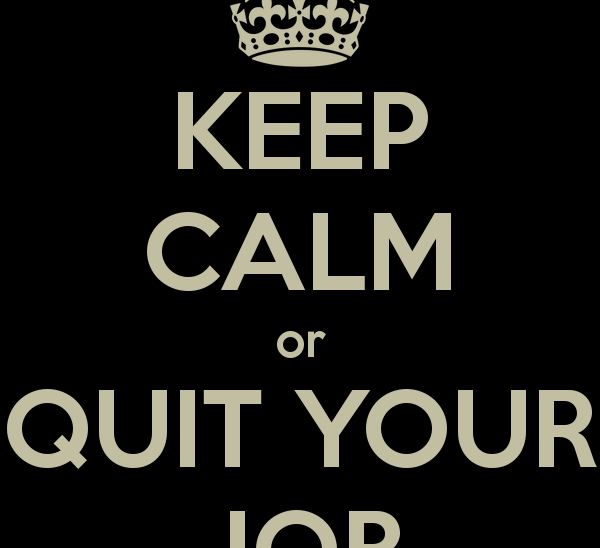 Akshay Singh has five years of good professional experience behind him, and is doing well in his current job. Like many others in his position, Akshay feels that this is the right time for him to pursue an MBA, which will help him not only gain more skills but also seek wider positions within his industry. However, before he can apply to top MBA programs, Akshay needs a GMAT score. Preparing for the GMAT per se is not a problem, but Akshay has little time for the preparation. He often returns home from work well past 9pm, and has little energy left to study then. In the morning, he must leave home again at 8am. Weekends afford some time for studying, but work often spills over to at least a few hours even on weekends, and of course there are family commitments and domestic chores to take off. After accounting for all this, Akshay has very little time left over to devote to studies. He is therefore thinking to quit job for GMAT.

How the ‘Quit Job for GMAT’ thinking starts

Before the ‘quit job for GMAT’ option struck him, Akshay tried other avenues. He explored the possibility of long leave to prepare, but he was told he could get at most a couple of weeks off.

This would not only be insufficient time, but it would also mean that he would be left with no leaves to avail of after that. He also understood that once he got back to work after those two weeks of leave, the work pressure would be back, more intense than ever.

This is all assuming that he got the leave in the first place – HR certainly seemed alarmed even at the prospect of Akshay considering it.

Akshay understands that quitting his job is no small decision. Yet, he feels that a higher GMAT score will be critical to help him gain that much-vaunted MBA admit, and he is certainly partially right.

GMAT scores do play an important part in applicant selection, though the GMAT is not the only component that matters. Akshay therefore reasons that by quitting, he will get more time to prepare, and by the time his savings from his current job run low, he can probably find another one, once the GMAT is out of the way.

Why you should not quit your job for GMAT prep

Akshay is certainly not alone in thinking this way. Every year, hundreds of professionals think exactly the same way. Yes, the potential absence of a steady income for some time does rankle, but then the irresistible allure of having entire days completely available to give one’s absolute best to the GMAT is also present.

What most applicants fail to consider is that there are several things not accounted for with this strategy:

You may require more than one take for the GMAT

Several applicants, even those who ultimately end up with spectacular 750+ scores, may have to take more than one shot at the GMAT. While you may feel that a month/ two months of dedicated effort would be enough to get a spectacular score, there is a possibility that things go wrong on test day.

Ending with a score that is even 30-40 points below your target could cause you to be unsatisfied, and in these days when cancelling scores is allowed, immediately make you consider a retake. If this happens, your original plan of being out of the workforce for one/two months may get stretched more.

Not everyone can prepare dedicatedly weeks together for the test

Be aware – different test takers are different. Before you begin, you might feel that you would easily be able to put in several hours in a day over many weeks to give the GMAT your best.

However, later, you might find that you are not able to effectively put in more than 5-6 hours a day of preparation. There are of course ways to get around this fatigue, and the preparation itself should be considered as training for test day, but the fact is that you are using only part of your day to prepare.

The rest, which could have been productive in giving you an income if you had a job, is now going waste.

Many test-takers also overestimate their prospects of finding another suitable job once they are done with their GMAT.

You might not be able to find another job very quickly, and there is no guarantee that your earlier employer will be all-welcoming when approached to take you back. Most employers tend to view this not as time taken off, but as an old employee returning after having failed to find a different job.

Unfortunately, the picture as it seems to most AdComs won’t be pretty. While most AdComs wont look to deeply into short job gaps (1-2 months), anything 3 months or more could require a deeper look-in.

Some applicants try to explain this away by saying that they were looking for more challenges or a new role and had to spend this time job-hunting, but that is a dichotomy – why were you also using this time to take the GMAT and then to apply to B-school?

Are you a busy professional looking for customized help on the GMAT? Our 1-to-1 personalized GMAT training option may be just what you are looking for. If you are based in India, you could also join one of our batches focused on working professionals and their needs. Contact us today to know how we can help you too, or just to have us assess your chances!

Most AdComs will also not buy the logic that you needed the time off to study for the GMAT. For them, most people manage to do just that while also working full-time jobs, so quitting you job just for the GMAT / for preparing your applications can seem more like a crutch than focused preparation.

Finally, job changes just before applying to B-school are best avoided – they make your entire career strategy seem a bit confused, almost like you are not sure about what your next step should be.

Of course, if you are not able to find a job and are unemployed at the time of your application, that can be possibly the biggest negative. While it may not get you rejected, it will certainly be questioned.

How to prepare for the GMAT with your job

While this may seem impossible, it is something that thousands of test-takers manage every year with a lot of success. Yes, it will require discipline, planning, and sacrificing your social life for at least a few weeks. The rewards though are more than well worth it. Here are some alternatives you may want to look at:

– First, try to plan and create a disciplined schedule. Try to do this with you job. Look at this post for more ideas on how you can. Speak to your family, and keep your focus firmly on preparing for the GMAT and working full-time, with minimal or no other distractions.

– If you feel that you just cannot devote any time along with your job, and need time off, explore the option of extended unpaid leave. This might also mean that your chances of getting that upcoming promotion go down the drain, but it is better than not having a job entirely.

– Another option might be to try and talk to your employer about moving to a part-time job profile (at a lower salary of course) for a few weeks or months.

This might depend on how long you’ve worked at your current job (more chances of getting it if you’ve been a long-term employee), but you might be surprised at how much more personal bandwidth you can get just by getting one additional day off in the week.

– Check out options to study / get coaching for the GMAT on late evenings or early mornings. Join weekend GMAT batches to ensure that you stick to a schedule and use your weekends to good effect.

– Try to have an experienced mentor to help talk you through difficult times. On occasion, all it takes is a cool head who can talk you through and keep you committed just when you feel you can’t manage both things together.